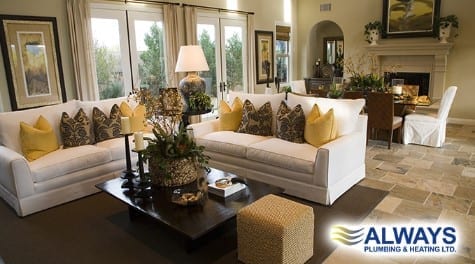 Keeping the air clean in your home isn’t something you can afford to skimp out on – especially as we continue to barrel straight through the heart of a season where it seems like everywhere you turn, someone else is coming down with an illness. More particles than we know are floating around, and ridding the air of the ones that can cause harm isn’t something that needs to stress you out with all the other curveballs life can throw at you.

There’s a simple way to take care of it, though, and all it takes is a simple call to Always Plumbing & Heating to have that problem remedied before you know it. We’re proud to offer Electric Air Cleaners as well as UV lamps – two simple additions to your home’s furnace and ventilation system that will noticeably change the quality of your air — from Dynamic Air Quality Solutions.

Filtering Out the Undesirable Particles

You’d be surprised at just how many types of particles get through your filter and start to drift through the rooms of your home. They’re usually split into two categories: ones that are larger than 2.5 microns in diameter, and ones that aren’t – a micron is 1/25,000th of an inch, so the size that demarcates the difference is still an infinitesimally small measurement to make.

While installing an electric filter will catch a sizable portion of the particles you want out of your house – like pollen, which is comparatively massive at 5 microns in diameter — it’s unfortunately not going to catch everything. In fact, there’s a good chance it won’t be able to remove the organisms that can pose the greatest risk – at least, not alone.

With both of these additions to your HVAC unit, the air in your home can become noticeably cleaner before you know it! Give us a call at 780-489-8118 (Edmonton) or 587-601-1253 (Fort McMurray) and let the professionals at Always Plumbing & Heating help you take the next step to creating a safer and more enjoyable environment at home today!