Dangers of Poly B Pipes & Poly B Plumbing 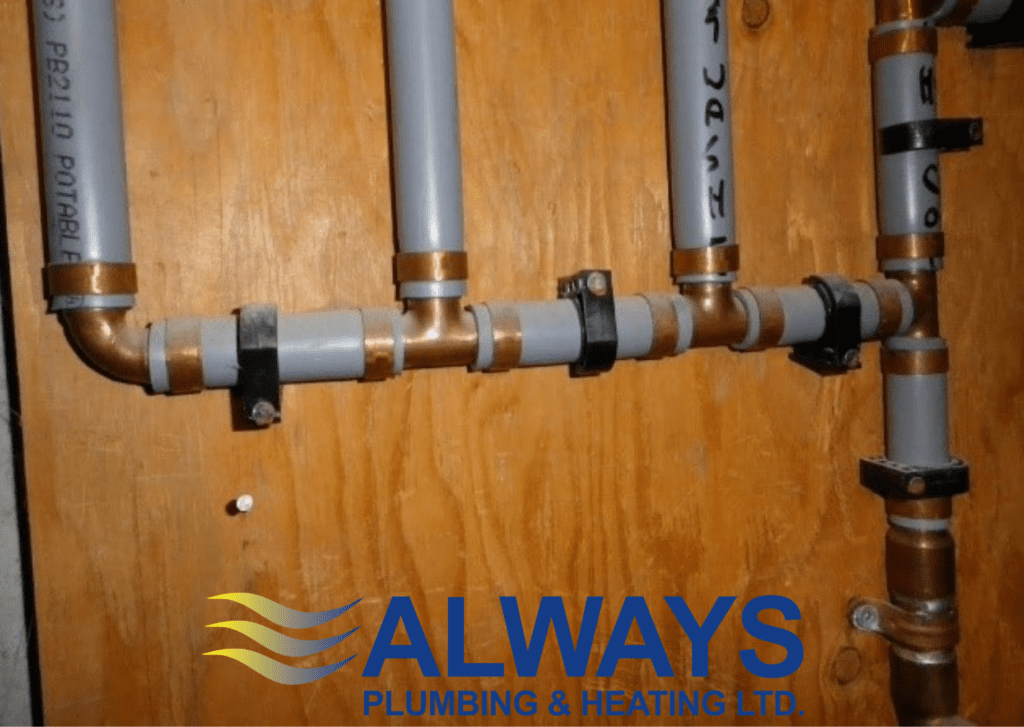 What is Poly-B Pipe?

Poly B™ (polybutylene) was a common type of plumbing material used to supply hot and cold water in residential and commercial buildings built between 1978-1995. It was a reliable and lightweight option for many plumbing projects. Poly b plumbing was much cheaper than copper piping, and it was installed in over 700,000 Canadian homes.

How to tell if you have Poly-B Plumbing?

Poly-b piping is generally a light grey plastic pipe with copper fittings and elbows. You can easily identify if your home’s plumbing has poly-b fittings by removing a few ceiling tiles in your basement, such as in your utility room, and viewing the grey pipes in the ceiling of your basement. If your ceilings are drywalled, you can check in your mechanical room at your water meter or the pipes coming from the top of your hot w ater tank. If the pipes are grey plastic with copper connections, it is likely that your home has polybutylene piping. If you want to know what type of plumbing your home has, contact your local association of certified home inspectors to get a home inspection.

What is the problem with Poly B Piping?

Homes with poly-b plumbing were discontinued several years ago for more modern plumbing systems because over time, the pipes were susceptible to failure and began to burst and leak, causing untold water damage. As homes begin to age, more problems arise with this type of piping, causing devastating effects to many homes. Subsequent insurance claims can take years to resolve, and that is subject to if your home insurance policy will even cover the claim. Poly b plumbing has been through so many class action lawsuits that many insurance companies will not cover you at all if this piping fails, or they will refuse to insure you until you have it replaced. With poly b piping, there is a very strong possibility that it will fail and the homeowner is on the hook for replacing the pipes.

My home has Poly-B Piping. What do I do?

Getting reimbursement through a lawsuit against poly-b plumbing in your home is no longer an option. Poly-b paid over 20 million dollars in a class-action lawsuit, but the reimbursements were only available if you replaced poly b plumbing by 2005 or within 15 years of being installed. The reimbursement only covered 25% of the system and 25% of the damages.

The safest thing that a homeowner can do is be proactive by replacing their poly b plumbing, in a procedure known as whole-home re-piping, before pipes begin to leak. Repairing sections of poly-b piping is not a solution, as once they start leaking, the problem will keep returning in more areas than one.

What is the cost of replacing Poly B Pipes in my home?

The cost of replacing poly-b piping will vary depending on the size of your home. The expert plumbers at Always Plumbing & Heating will remove the poly b pipes from your entire home and transition them to pex piping. This can be an expense upfront, but it will protect you from future devastation that would be sure to happen if leaving poly-b piping in your home. If you do, your plumbing system may fail without warning, causing water damage. If you have any questions about poly-b piping in your Edmonton and area home, please do not hesitate to contact the professionals at Always Plumbing & Heating, your local experts in whole home re-piping.